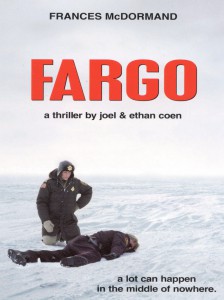 Today is the 20th anniversary of Fargo (1996). The epic crime drama/thriller from the Coen brothers seems timeless. If you have ever fantasized about retracing the steps of Marge Gunderson or Jerry Lundegaard, this might be your year. Below I have outlined a Fargo inspired trip.

The movie was filmed all over Minnesota and North Dakota. I will focus on an itinerary that is more in the spirit of the movie and not a literal filming-location based trip. It’s honestly better this way as many of the sets / locations depicted in the film are fake. For example, the Paul Bunyan statue was created for the movie and was removed afterward. There is, however, a Paul Bunyan and Blue Ox statue in Bemidji, MN which is featured in the Fargo TV series. Here we go:

Day 1 – Fly into Minneapolis-St Paul International Airport, you will need to rent a car for this trip. Car rentals are running around $13 a day via Hotewire for a full size car. They don’t have a 1987 Oldsmobile Cutlass, I checked. Book a room at the The Grand Hotel Minneapolis. There are not many movie places to visit in Minneapolis but the Institute of Art is the #1 rated thing-to-do downtown. Book dinner with an old friend from high school at Surly Brewing, where I hope they don’t cry like Mike Yanagita.

Day 2 – Hit the road. Starting from downtown Minneapolis, head to Brainerd. Officer Gunderson is based in Brainerd in the movie and this is the area where Showalter and Grimsrud are pulled over by the trooper after they kidnap Lundegaard’s wife. Try The Barn for a lunchtime sloppy joe.

Bemidji is the next stop on our road trip. The original movie didn’t touch Bemidji much but an entire season of the Fargo TV series spends a good deal of time there. You will also find a Paul Bunyan and Babe the Blue Ox statue, although as we stated above – it’s not the one from the movie. It is very cool though. Finishing the drive to Fargo, stay the night at the The Hotel Donaldson in downtown Fargo. Mezzaluna would be my choice for dinner. Hookers are optional.

Day 3 – Spend the morning at the Fargo Air Museum, the zoo or Roger Maris museum before your drive back to Minneapolis. Make sure you leave time to stop and bury some money for good luck.